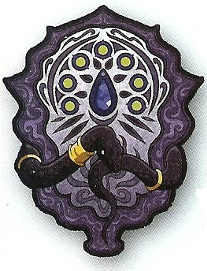 ﻿
Updated 2014/02/10 : Since I was half-way done with the translation, I decided to complete it.  I couldn't find this event on Youtube, so I added some screenshots from the game ^^

Note: This is translated from the Sora no Kiseki the 3rd Scenario Book. Some of the descriptive text that appear here may not be in the actual game. Those will be indicated in grey.

The collapsing Liberl=Ark.  And the Arseille and Mountain Lion that take flight.

Deck of the Glorious. The sound of Liberl=Ark's collapse can be heard from a distance.  On the deck are <Phantom Thief> Biblanc and <Lanky Wolf> Walter.  Biblanc stands in front of the railing, while Walter is seen sitting down and leaning against the railing.  Walter looks at the collapse of Liberl=Ark over his shoulder.

Walter: ... in the end, none of the others made it back... to talk about it so lightly, hey?
Biblanc: It looks like Renne already left this airspace.  And Lucciola went missing.. but it's no use worrying about her.
Walter: Hehe... who says I'm worried.  Just that it'd be a waste if she's dead.  Hoping she doesn't die a meaningless death.
Biblanc: Hehe, agree.  But... there's probably no hope left for Loewe?
Walter: ... Yeah.  Tsk.  If I had known it was to come to this, I would've sparred with him earlier.  That bastard, always making up excuses and dodging our match...
Biblanc: Unlike us, he had a clear motive.  And it looks like... he succeeded.  He probably doesn't have any regrets.
Walter: Tsk...

Walter, still sitting, takes out a cigar and lights it.  The smoke of the cigar starts to linger in the air. 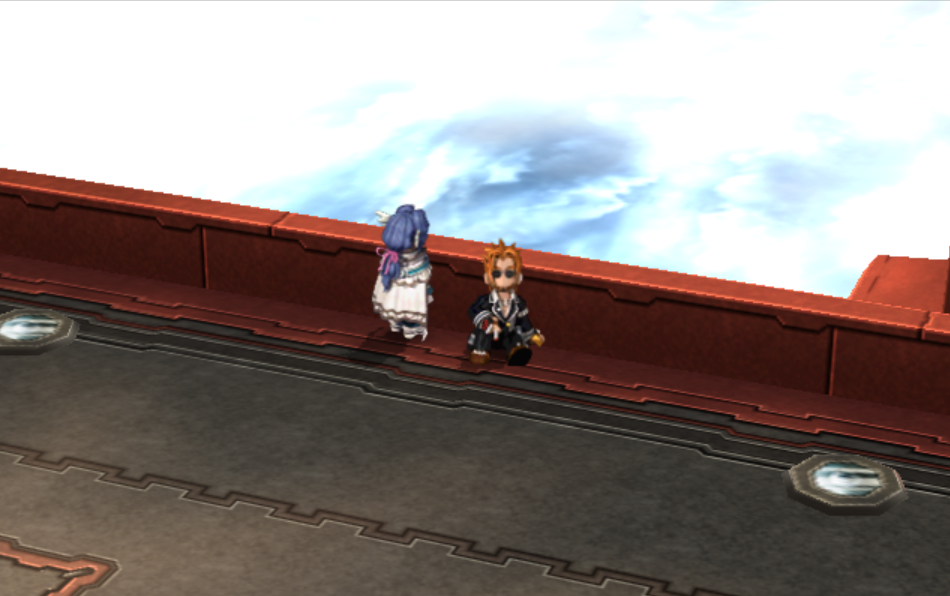 ---
A room inside the Glorious.  Gilbert looks intently out the window.

Gilbert pounds on the window.

Gilbert: I thought we were supposed to use that floating city to control Liberl?!  To control the whole continent... but this, this is totally different from what I was told!

Gilbert: ... N..no wait.  Now that I think about it... I imagined that all by myself.  The Professor and the others never said anything like that...

Gilbert jumps onto the bed and holds his head as he shakes in fear.

Gilbert:  I don't want to do this anymore.... Campanella-sama will torture me for letting those people escape... And now on top of that is this ambiguous closure... I.. I...  JUST WHAT THE HECK HAVE WE BEEN DOING ALL THIS TIME?? 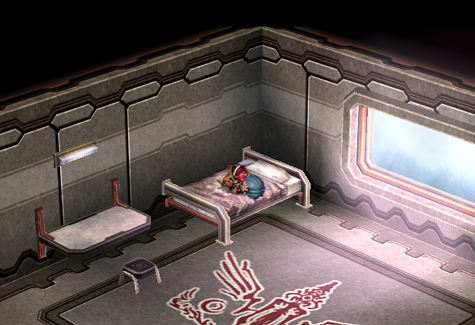 ---
In front of the elevator on the Sanctuary Floor.  The door opens and out walks Campanella.  He heads toward the Sanctuary.  Enhanced soldiers with guns stand on the right and left side of the Sanctuary door.

Soldier A: Campanella-sama!
Soldier B: You're alright!

Campanella walks toward the two soldiers.

Campanella: Hehe, good work you two.  But, still working at a time like this, aren't you two a bit too dedicated? You know~ something great is happening outside~  It's not the kind of spectacle you'd get to see even if you pile on the Mira.  I think you can still make it on time, why don't you two go and take a look?
Soldier B: No, we can't possibly..!
Soldier A: We can't just ....
Campanella: Haha... looks like it's a bit hard for those just following orders.  It's fine then.  Let me through?  I have some things I need to do inside the Sanctuary.
Soldier B: Huh?
Soldier A: B...but... even if it's Campanella-sama, without the Professor's permission...
Campanella: Ahh the Professor, he's dead. 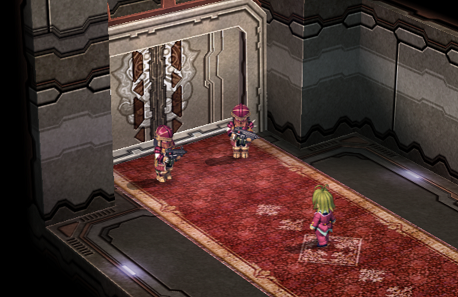 The enhanced soldiers are shocked.

Soldier A: What!?
Soldier B: How's that possible!?
Campanella: You two implying that I'm lying...? Heh, I'm a little hurt.  Fine, how about I give you two some precious memories too, just like Gilbert.  That way, you guys will surely believe me.

Soldier A: T..that's okay...
Soldier B: No need to trouble you sir! Since we believe you from the start!
Campanella: Then hurry up and go take a look.  The person who ordered you to stand watch is no longer here.
Soldier A: Yes please let us do that!
Soldier B: We'll go right this instant!

The enhanced soldiers run out in a hurry.

Campanella:  Hehe, they no longer have any use.  It's a waste to just release them after taking away their memories.  How about I take in the whole squad?

Campanella walks to the door and opens it. He proceeds inside.

Inside the Sanctuary. The sound of Liberl=ARK's collapse can no longer be heard. Campanella walks toward the pipe organ and stands before it.

Campanella: As expected, even the noises from outside can't reach a place this far in. Well, I guess I can't fulfill my role otherwise.

Campanella snaps his fingers. Crests and a huge monitor appear in front of him. 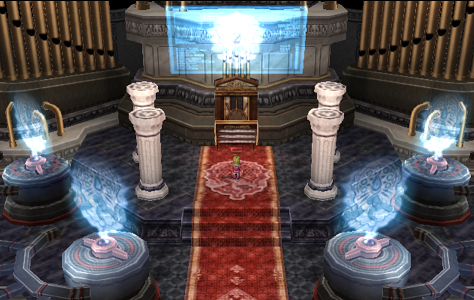 Campanella: --Access. Enforcer No. 0. <The Fool> Campanella. Asking for permission to enter the "Celestial Globe" in place of the Third Pillar, George Weissmann.

The crests and monitor begin to glow.  Campanella stands still inside the Celestial Globe. 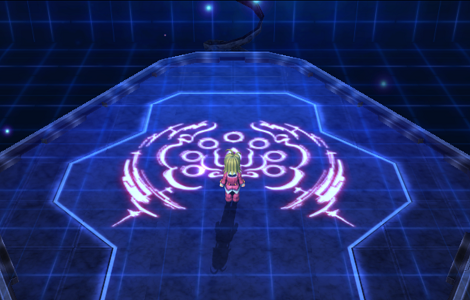 Pillars numbering I to VII rise in succession around the platform on which Campanella stands.  Only Number 3's pillar remains unlighted, showing no response. 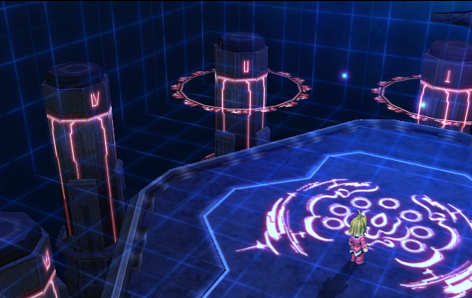 Fifth Pillar: But... to think that <The Faceless> was defeated...
Second Pillar: Hehe, looks like he had a bit too much fun in his old nest. Hey Campanella. How did he die?
Campanella: Hehe, it was a masterpiece.  He was turned to salt from head to toe, and in the end, smashed into powder.
Second Pillar: Oh my, how terrifying~ Ahh, how nice it'd be if I was there to see.
Sixth Pillar: <Stake of Salt>... the product born out of that singularity in North Ambria. Hmm, I've wanted to see the actual thing with my own eyes...
Fourth Pillar: Haha, but what a surprise. For such a cunning person to be so caught off guard.
Fifth Pillar: ...Most likely his opponent was one of the <Dominion>. No doubt it was that <5th Knight> who's said to be absent.
Fourth Pillar: I see...that's why there was an opening.  That knight, what's the name?
Campanella: Kevin Graham. Studied under that <Carnelia>, and code-names himself  the <Heretic Inquisitor>. Hehe, quite the interesting fellow and twisted in various ways.
Second Pillar: That <Carnelia>'s...hehe...somehow I'm getting intrigued.
Fourth Pillar: Hold on there <Abyss>.  Leonhardt whom you've been so obsessed over just died, but you're already fishing for the next guy?
Second Pillar: My, I'm offended. Even if I'm like this, I'm still mourning over Leon's death. Until the very end, he never came to me, making it all the harder to forget.
Seventh Pillar: ....Indeed. He was a great swordsman but did a really regrettable thing.
Fifth Pillar: He was probably the only one within the Legion able to spar swords with you.
Seventh Pillar: Yes, I unreasonably asked him to practice with me many times. He might have become a swordsman surpassing even me someday. In that way, it really is regrettable... 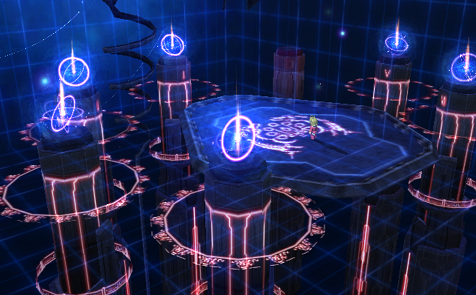 Sixth Pillar: Hehe, well it won't really pose to be a problem. The loss to our overall military strength is minuscule at best -- they're within our estimation. Regarding influence to future operations, <Angel of Extermination> is a bigger problem.
Fourth Pillar: Haha, you're talking about that little girl? She looks to be really confused, will she ever return to us?
First Pillar: Well, that's her decision. We may be higher in rank, but we cannot restrict their actions. That is the <Law>.
Sixth Pillar: ....But still....
First Pillar: Doctor, we also understand the importance of the Gordius series. But that is the <Law> set by that Person. You must understand the meaning of that?
Sixth Pillar: ..............
Second Pillar: Hehe, though I feel that the Professor's obsession with that Black Fang boy went a bit overboard.
First Pillar: That's right, and it is the truth that it became the impetus to his demise. Isn't that right, Campanella?
Campanella: Hehe, his obsession with Joshua being a reason for his loss might be true. Looked like that Kevin had his eye on that as well.
Sixth Pillar: Alright, alright, I understand. Even so, I am someone entrusted with the <Thirteen Workshops>. Even if it's only to check on the performance of the Gordius series, let me continue to monitor her.
First Pillar: Yes, we leave that to you. More than that, everyone, the time has come for the Advent.
Fifth Pillar: Hm, is that right.
Second Pillar: Hehe, I'm getting excited.

Campanella kneels down in respect and lowers his head.  The innermost Crest glows and a remarkably large symbol appears. 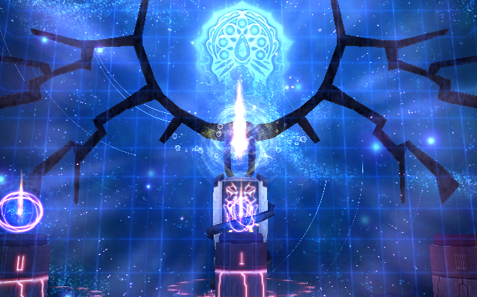 Thanks for all your hard work.
Campanella too....
Acting as my agent in overseeing the Plan
You served a great cause.

Campanella: Your words honor me too much. I believe you are already aware of all that transpired in the "Gospel Plan"....I have come after fulfilling my most important mission.

Campanella lifts his head as he continues to kneel. Weissmann's Staff appears on the floor in front of him, glowing. The jewel on the Staff gives off a sudden radiant light, and from there a golden spherical object rises and floats in mid-air. 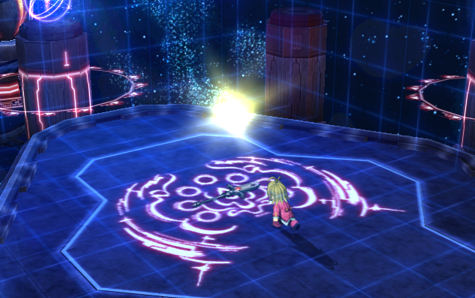 The spherical object proceeds to be absorbed by the Master's shadow.

I have indeed received it.
However....
The compensation paid was too great.
Weissmann....
And Leonhardt....
No, not just them
All the sacrifices related to the Plan
The responsibility rests on me.

Fifth Pillar: N, nothing of the sort!
Seventh Pillar: ....Please do not blame yourself. <The Faceless> only reaped what he sowed.
Second Pillar: If someone's to blame, then all of us <Angis> should be the ones to blame for turning a blind eye on his actions.

No, I foresaw this state of affairs to a certain degree.
Even so, I...
Entrusted all decisions to him.
Because it was my judgement that that was a necessity for the world.
That's why...
All the responsibilities rest on me.

Fifth Pillar: <Master>...
Seventh Pillar: Why do you blame yourself so....

First Pillar: .... I understand.
Sixth Pillar: Hehe... though I'm a bit bothered by it, we will do as you command.
Fourth Pillar: How shall we proceed from here on out?

Fifth Pillar: Ohhh....!!
Second Pillar: Hehe... as you command.
Sixth Pillar: Haha, please entrust everything to us.
Fourth Pillar: All of us <Angis>...
Seventh Pillar: In accordance with the Great <Master>'s wishes...
First Pillar: Shall, from here on, undertake the execution of the project with our hearts and souls.

---
Back inside the Sanctuary. The Crests and monitor have all but disappeared. In front of the pipe organ stands Campanella.

Campanella: "Phantom Flame Project".... it's finally about to begin.  Preparations are perfect....the "Gospel Plan" cannot even compare to its scale and level of completion. Hehe.... this is about to get interesting.

Campanella turns and faces us, the players XD

Campanella: --I don't know who you are, but how about you stop peeking? 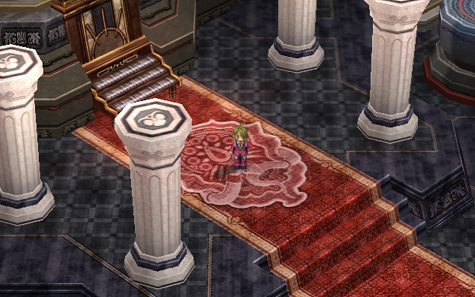 Posted by Raindrops at 6:59 PM

I am in no way affliated with Nihon Falcom or any of its affliations. All Kiseki games and its content copyrighted by Nihon Falcom. Translations on this site belong to me.

I kindly ask that all readers refrain from copying my translations and posting it on other sites.

I can't guarantee frequent updates since I'm doing this as a hobby. I'm largely using this blog as a way to improve my Japanese through translating.
Feel free to leave me a message ^^

Raindrops
Fan of RPGs in general, especially Legend of Heroes Kiseki games and Yoko Taro games. Also a Visual Novel lover. I translate anything that interests me ^^ Not a native Japanese speaker so if there are any mistakes... *whistles*