Note: Taken from the Crossbell Archives. It took a long time, but we're finally at the last post of this story summary! This is Part 2 of the Epilogue Chapter.

Current Progress: 19 out of 24 pages completed. Hm I was planning to update this when I have everything completed, but... eh whatever. Something is better than nothing, right? I'll be busy with Ys 8 but I'll try to get the rest done. All that's left is the final boss really, and the ending.  @#!*%$ long summary (┛✧Д✧))┛彡┻━┻

10:30 AM of the same day. The Orkis Tower infiltration finally begins and the Bracers acting as vanguards open the way by defeating the magi-tech golems standing guard. With that as a sign, the police cars speed up the slope and fly into the Orkis Tower grounds one after the other. In order to deal with the magi-tech golems defending the grounds to the entrance, the police attack while using their cars as barricades. While providing back-up support to the Bracers who have penetrated deep into enemy lines, they work together to cut out a bloody path leading to the Tower. Both Lechter and Kirika are fighting bravely alongside the others, and seeing the perfect chance, Sergei signals Lloyd's infiltration team. At his sign, the SSS orbal car accelerates to an immense speed and crashes through the front door of the Orkis Tower. Lloyd's group successfully gets inside. 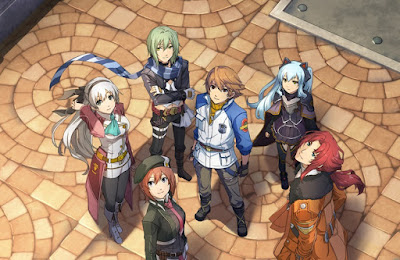 Note: Taken from the Crossbell Archives. This is the end of their story (sniff, at least for now). Who would've thought I'd get this far? Certainly not me, looking back at what I said when I first started. Hopefully I'll be able to persevere to the end because this chapter is a doozy. Without further ado, let's get this started! ┌(・。・)┘♪

This is Part 1 of the Epilogue Chapter. For Part 2, follow this link.

>> Infiltration into Independent Nation of Crossbell


At the bridge of the Merkabah No. 9 soaring across the sky, a video call session is ongoing with the Merkabah No. 5 that is flying parallel. Their plan is to let Kevin and Ries' Merkabah No. 5 act as decoy while Wazy's Merkabah No. 9 infiltrate into Crossbell during that time. As Lloyd watches over the situation from the side, he unexpectedly comes to learn of Kevin's nickname and its origin. Ending their communication, the Merkabah No. 5 goes on ahead and starts to accelerate. As it engages in intense aerial combat with the Aion Type- β that suddenly appeared, the Merkabah No. 5 lures its opponent away from Merkabah No. 9's flight path as previously arranged. It continues to fly above Crossbell at full speed while creating an opening for Merkabah No. 9, which has already cloaked itself through its optical camouflage mechanism. 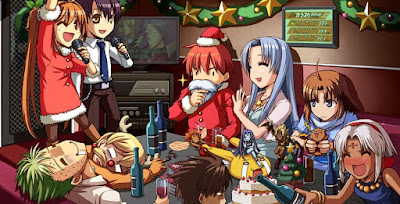 Yes, I know it's early by a few days. But I'll be preparing to leave on my Christmas trip by the time you're reading this. So no time to update except now~

Anyway, I've been saving all these up for a big update~ (because it's fun like that hehe)
Think of it as some sort of Christmas present? Hopefully there's something for everyone~
So, what's new? Let's see, there's...

- Ao no Kiseki Scenario Fragment Chapter: We're getting close to the end! (Well not really, the final chapter is a lvl 100 behemoth, but just let me think that for now...)
- Ao no Kiseki Drama CD Road to the Future: This summary acts as a bridge between Zero and Ao~ recommended before playing Ao.
- Sora no Kiseki 3rd Morning of Departure: You may or may not have noticed, but I went and finished this one up finally! If you haven't read it yet, this one is about Estelle and Joshua's childhood. And the end connects with the ending of SnK SC.
- Sora no Kiseki Drama CD Advanced Chapter:  Estelle and Joshua meet the Russell family! This takes place after SnK 3rd (though there's only really minor spoilers for the 3rd).
- Ao no Kiseki Scenario Prologue Supplemental notes: I've actually started on these earlier than planned (because they're quick to do haha). So far, only the Prologue ones are done. I should note here though that I recommend reading these only after you finish the game. You'll know why once you read some of them (ironic huh?) It's just that a lot of the information here go in-depth into certain plot points, sometimes drawing from events/reveals that happen later in the game. There are also lots of details that the game doesn't even tell you.

Have a great holiday! And an advanced Happy New Year! 来年も宜しくお願いします!
And to all those playing Cold Steel, have fun!

PS. I'll be taking a break from translating as I play through SC Evo and Steins Gate 0~ Actually there are lots of games coming out I want to play too, so I don't know when the next update will be XD 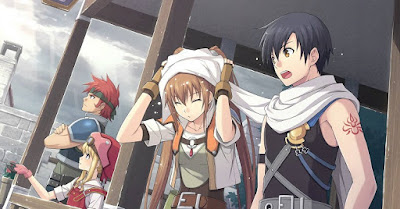 Note: This Drama CD takes place between Sora no Kiseki 3rd and Zero no Kiseki. Unlike a lot of the other Drama CDs which are adaptions of the in-game story, this one is original story~ It's one of my more favorite ones because there are plenty of cute moments (Estelle and Joshua <3) Youtube link to the Drama CD is at the bottom of this post. Enjoy!

Estelle: That day, Joshua and I, who have been traveling around the Erebonia Empire, once again set foot into Zeiss after a long time. 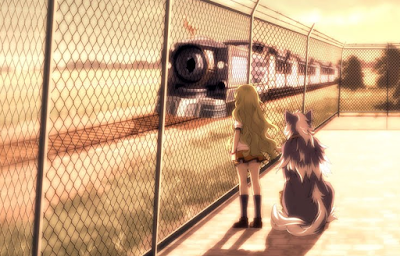 Note: Taken from the Crossbell Archives. Another short chapter before the final one! We learn about a lot of stuff in this chapter though~ And certain reveals took me by surprise~ in a good way!

<< FRAGMENT: BEYOND THE FALSE PARADISE >>

With the power of the Treasure of Zero in their hands, the independent nation of Crossbell proposes the formation of the "Zemurian Alliance". With Crossbell as its leader, this alliance will denounce all wars and ensure freedom in all economic activities. For those small countries and autonomous states constantly under pressure from the Erebonia Empire and Calvard Republic, this proposal is a highly appealing diplomatic tactic. As a result, though the neighboring countries were originally critical of Crossbell's high-handed method, it gradually turns into a situation in which even they've become unable to resist this flow of events. In addition, an economic crisis triggered by the situation in Crossbell has started in the Calvard Republic, and anti-immigration terrorist activities intensify. In the Erebonia Empire, a large-scale civil war erupts, and there is a rumor spreading that Chancellor Osborne has been assassinated. Furthermore, Ouroboros secretly discloses their intention to assist Crossbell to the governments of the other countries. There is no stop to Dieter's ambition.

Ao no Kiseki Drama CD: Road to the Future 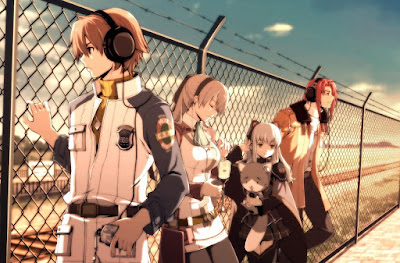 Note: Taken from the Crossbell Archives. This is a summary of the drama CD that serves to fill in the blank period between Zero no Kiseki and Ao no Kiseki. I highly recommend reading this to understand what each of the SSS members are up to before the start of Ao.

At the SSS building entrance, Lloyd and the others see off KeA who is attending her first day of Sunday school. In contrast to KeA who is filled with excitement, Lloyd and Elie feel nervous, like parents worrying about their child. Beside them and making fun of two are Randy and Tio. After the settlement of the D∴G Cult incident, bright and peaceful days gradually return to the SSS. And today, the members of the SSS have received an invitation from Dieter, the new Crossbell mayor. 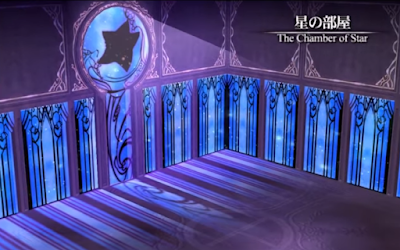 Note: I've been debating with myself whether to post this for a while because this is not entirely recognized by Falcom. This is a little something quite different from the usual translations I do. Anyway, for those who have played Sora no Kiseki the 3rd before, you all know about the different "Doors" in the game. However, it appears that there are some unused stuff inside the game files that might've actually been doors that were scrapped. The things in this post are the "findings" supposedly from some Chinese hackers.

I must say here because it's important, I cannot 100% guarantee the authenticity of these "findings". These are merely stuff going around the Chinese fanbase. In any case, please just enjoy them for what they are, little fun asides ^^ Don't take them too seriously, even better, treat them as fanfiction. As far as I know, the images are authentic, just scrapped from the actual game. It's the stories that I'm not so sure about (because some things clash with what we know, or maybe they were ideas that got scrapped? who knows). So if there's anything certain you can take away from this post, the images are it.
Though apparently, the dialogue in Star Door #20 is recognized by Falcom? At least that's what people say.... don't ask me. There's also a video for this door, which I have provided the link for.

I am in no way affliated with Nihon Falcom or any of its affliations. All Kiseki games and its content copyrighted by Nihon Falcom. Translations on this site belong to me.

I kindly ask that all readers refrain from copying my translations and posting it on other sites.

I can't guarantee frequent updates since I'm doing this as a hobby. I'm largely using this blog as a way to improve my Japanese through translating.
Feel free to leave me a message ^^

Raindrops
Fan of RPGs in general, especially Legend of Heroes Kiseki games and Yoko Taro games. Also a Visual Novel lover. I translate anything that interests me ^^ Not a native Japanese speaker so if there are any mistakes... *whistles*